When a Work Injury Gives Rise to a Personal Injury Claim

There are certain situations, however, when a personal injury claim might be appropriate in the workplace. Most often, this is when a third party (someone other than your employer or coworkers) is involved. For instance, if you got into a car accident during the workday, then you may have a personal injury claim against the at-fault driver1. Similarly, if you were injured while working, but the injury was due to a dangerous condition on a third party’s premises, you may sue that third party in civil court.

Some advantages of pursuing a third-party claim are:

Unlike worker’s compensation claims which generally disregard the question of ‘who is to blame,’ personal injury claims assign responsibility to the culpable party. Moreover, tort claims allow you to be “made whole.” Not only can you recover payment for your medical bills and a portion of lost wages, but you can also recover damages such as pain and suffering, mental anguish and emotional distress. You might further recover punitive damages if the liable party’s conduct was particularly egregious, such as malicious or reckless actions.

Reimbursement to the Worker’s Compensation Carrier

The personal injury attorneys at Hawks Quindel have experience working on third party claims. We work alongside the worker’s compensation team to maximize clients’ recoveries. If you have questions about a potential personal injury case, please contact us for a free initial evaluation.

1This may include a claim against a third party driver or a coworker if s/he negligently operated a vehicle not owned or leased by the employer. See Wis. Stat. § 102.03(2). 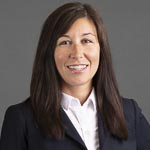 Danielle Schroder
Danielle is a shareholder in the Madison office of Hawks Quindel. She practices in the areas of personal injury, employee benefits and employment discrimination. Danielle has litigation experience in state and federal courts, and she is a zealous advocate for the cause of her clients.