The recent decision in Obergefell v. Hodges, in which the Supreme Court ruled the Constitution guarantees same-sex couples the right to marry, was a big 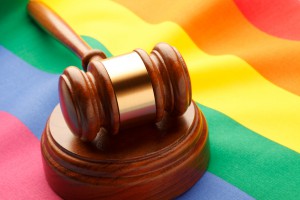 victory for LGBT rights. However, there is still a long road ahead for equality. In many states, it is still legal to discriminate against someone on the basis of their sexual orientation. As one representative in Congress said in support of a federal bill that would ban anti-gay and anti-transgender discrimination in credit, education, employment, federal funding, housing, jury service, and public accommodations: In many states, “a same-sex couple can get married on Saturday, post pictures on Facebook on Sunday, and then risk being fired from their job or kicked out of their apartment on Monday.” (1) Without federal protection, LGBT people in many states can legally be fired, evicted, and denied services for exercising their constitutional right to marry.

In a recent decision (2), the Equal Employment Opportunity Commission (EEOC), the federal agency responsible for enforcing federal anti-discrimination employment law, took a big step towards equality when it concluded discrimination against an employee because of his or her sexual orientation constitutes sex discrimination under Title VII of the Civil Rights Act of 1964.

Though Title VII does not explicitly include “sexual orientation” as a protected class under Title VII (which prohibits employment discrimination based on race, color, religion, sex, and national origin), the term “sex” prohibits employers from “‘rel[ying] on sex-based considerations’ or ‘tak[ing] gender into account’ when taking the challenged employment action.”

The EEOC’s recent ruling is based on the concept of sex stereotyping. In the 1989 decision Price Waterhouse v. Hopkins, the Supreme Court established that sex stereotyping, or discriminating against someone because of his or her failure to conform to the expectations of his or her gender, constitutes sex discrimination. Because sexual orientation cannot be defined without reference to the person’s sex and the discriminator’s expectations of “feminine” or “masculine” sexuality, the EEOC has determined this is a form of sex discrimination. Sex stereotyping has also formed the basis for some court decisions protecting transgender people from discrimination under federal law.

EEOC’s Sexual Orientation Ruling is Not Binding Law, So Many Must Still Rely Upon State and Local Laws, If They Exist

Thankfully, Wisconsin law protects lesbian, gay, and bisexual people (3) from discrimination in employment, housing, and public accommodations, as do some city ordinances, including Madison and Milwaukee. In fact, Wisconsin was the first state to prohibit sexual orientation discrimination in 1982. However, until federal law provides protection for lesbian, gay, and bisexual people in employment, housing, and public accommodations, even those in Wisconsin who have been discriminated against based on their sexual orientation are limited to state court remedies.
The information above is not intended to provide legal advice. If you believe you have been discriminated against because of your sexual orientation, please contact Hawks Quindel, where experienced attorneys can help you.

(3) Wisconsin state law does not explicitly prohibit discrimination based on gender identity, though transgender people may find protect under some city ordinances and, in some cases, under the “sex stereotyping” theory of sex discrimination under federal law. The Equality Act as currently written would protect against discrimination on the basis of gender identity. For more information, see https://www.hrc.org/campaigns/support-the-equality-act.

Nicholas Fairweather
Nicholas E. Fairweather is a Shareholder in our firm’s Madison office. He has represented labor unions and Wisconsin employees, focusing his practice on employment, labor, and consumer rights litigation.